So, what do you want to do this weekend? Catch a Ladder to the Moon?

Smith + Tinker launched Ladder to the Moon on the eve of Halloween at HERE Arts Center, the fruit of a five-month process of collaboration within its group of playwrights. Wikipedia, in its entry on Smith & Tinker--the electronic game company, that is--cites "the fictional characters Smith & Tinker, an artist and an inventor who are briefly mentioned in the Land of Oz series of books as the creators of Tik-Tok the machine man."

And, actually, here's what the theater-oriented Smith + Tinker's Sarah Rose Leonard had to say about that in an interview with blogger Kippy Winston:


In the Land of Oz, Smith, an inventor, and Tinker, an artist, created many fantastical inventions. But they are only referenced in the books; these two characters don’t actually appear. That’s because, long before you, the reader, showed up Tinker painted a river so real he fell in and drowned and Smith created a ladder to the moon and never came back down.

Yes, that certainly is some serious artist juju.

With that thought in mind, the purveyors of Ladder to the Moon promised: "Amid the mystic revelry of Halloween week, two entrancing bills will feature pieces related to fear, reinvention, and how we tell stories." 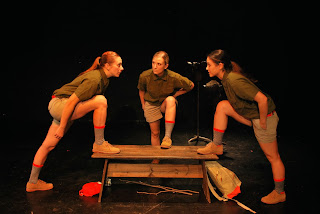 Amanda Szeglowski's Harold, I Hate You, created with her skillful all-female dance/theater troupe, cakeface, gets Program B off with a trio of tick-tock-machine-like scouts--the choreographer, Elle Chyun and Jeso O'Neill--heading off on a camping trip. These squeaky-clean automatons, crisp and uniform in gesture, distract and entertain themselves around the campfire with chatter about things that supposedly scare them--"I contracted flesh-eating bacteria once. I’m pretty sure," "I think I have Mad Cow disease"--in a firm but expressionless way that, perhaps, suggests how we rehearse and ritualize our fears until they truly rule us. And who is the hated Harold? Oh, that's a great story, and I will leave you to discover that one for yourself.

Program B also includes an excerpt from Ghost Stories, created by Tiny Little Band (Jerry Lieblich and Stefanie Abel Horowitz), and an excerpt from The Dinosaur Play by Ryann Weir, directed by Annie Tippe. In fairness, I can't say much about these works-in-progress, but I can tell you that the cozy environment of the first--and its eerie stories--took me back to childhood in a curiously pleasant way. (Caribbean folk love all kinds of ghost tales, and some of these types of stories are quite familiar to me from my early study of the paranormal.) Weir's nutty dialogue with co-star Dylan Lamb in The Dinosaur Play is hilarious and leads, near the end, to a marvelous and touching twist. Both of these projects show signs of something interesting cooking below the surface, and perhaps those elements will strengthen over time.


Ladder to the Moon's Program B repeats today at 4pm. For information and tickets, click here.

Enter on Dominick Street, one block south of Spring Street.

map/directions
Posted by Eva Yaa Asantewaa at 9:49 AM