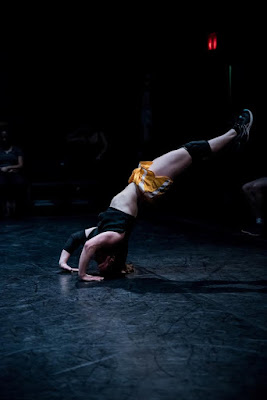 For abandoned playground, her world premiere at Abrons Arts Center, choreographer Abby Zbikowski converts the center's formal Playhouse stage into an intimate and drab, utilitarian performance space. No, let me type the word I first thought of: arena. Although that word might give you the false impression of large-scale size with Zbikowski's audience at a safe remove. Well, forget about it. No such size or safety exists.

Instead, abandoned playground is damned dangerous, as is Abby Z and the New Utility, Zbikowski's outrageous troupe--Alexa Bender, Shaela Davis, Justin Faircloth, Ali Herring, Fiona Lundie, Jennifer Meckley, Evelyn Sanchez Narvaez, Carlo Antonio Villanueva and Jessie Young--like STREB's action heroes. Sitting on the Abrons stage in a ring around these dancers, within inches of their propelled limbs, you find yourself flinching and tucking your body out of reach of thrusts and jabs and droplets of sweat and feet slicing too close to your face. The New Utility might have valiantly signed up for an hour of combat duty, but you did not.

Those moments when one or another dancer will step out of the space, fold over gasping for breath and maybe get a sympathetic back rub from a colleague--those are likely real, not just for show. Because what goes on inside, under Jon Harper's darkness-enhancing lighting, is driven and brutal.

Once the dancers are in the space, warming up in their soccer shorts, if you notice a physicality and physical practice similar to that of prize fighters, you're on the right track. Pretty soon, they're whipping up and around, scrunching, pivoting and rebounding as if fighting with something invisible while battling themselves.

They gradually exit and re-enter through a retracted metal gate at the rear of the stage to an explosive soundscape, like a video war game, and to momentarily stronger lighting. Flailing arms seem to jerk two women's bodies backward, like they might pull right out of their sockets. One dancer spins on her knees, and her head twists rapidly as if trying to detach. Another pair creeps together along the floor or scrambles sideways.

Among other dance styles--such as hip hop and Senegalese Germaine Acogny's technique--Zbikowski has tap in her background. For some reason I can't begin to explain, I began to see it in some manically aggressive yet rhythmic moves. By that point, I might have been hallucinating. Anyway, the impression passed quickly.

Another moment found a dancer rising into a neat headstand--a very satisfying look, no?  So virtuosic!--only to slam over onto her back. She got up and stood near me, loudly panting--sounds of breath and impact of bone on floor are big time here--only to bound back into the center for another punishing solo. Sidelined players sometimes shout encouragement to those on the field--You got it! You got it!

For anyone who, like myself, feels dance to the core, with empathy that draws you into the work, this playground offers a hardcore workout unlike any other. Or almost. Again, there's STREB. But what appears to be going on here--which separates this work from anything I've ever seen from STREB--is a comment on our threatening times and a call to toughen up in response. And that means you, audience, too. This is not mere spectacle.

With original music by Raphael Xavier

Abandoned playground runs through Saturday, April 15 with a sold-out run, but for information on possible wait-list tickets, click here.

Subscribe in a reader
Posted by Eva Yaa Asantewaa at 11:27 AM