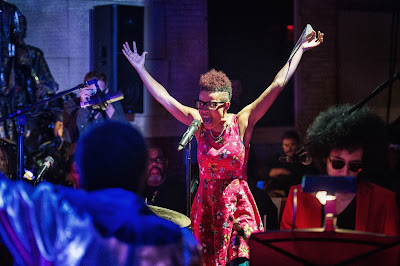 @Ed Harris and Taissa Farmiga in Buried Child by Sam Shepard, production by The New Group at The Pershing Square Signature Center

@Vigée Le Brun: Woman Artist in Revolutionary France at The Metropolitan Museum of Art, February 15-May 15

@Performances by Split Britches, Five Lesbian Brothers, Holly Hughes and Eileen Myles at Memories of The Revolution: Celebrating the first ten years of the WOW Café at Dixon Place, February 28-29

@Are we a Fossil, and Of Facings by Molly Poerstel at Gibney Dance: Agnes Varis Performing Arts Center, March 9-12

@Photographs of Eiko by William Johnston at Conversation Without Walls: Bearing Witness, part of Eiko Otake's A Body in Places platform at Danspace Project, March 11

@There Might Be Others by Rebecca Lazier and Dan Trueman (with Mobius Percussion, Sō Percussion and Mantra Percussion) at New York Live Arts, March 16-19

@Pergamon and The Hellenistic Kingdoms of the Ancient World, The Metropolitan Museum of Art, April 18-July 17

@Another Spell by Vicky Shick and Dancers, Danspace Project, April 14-16

@Rasa in the Round by Malini Srinivasan at Winter Garden at Brookfield Place, April 15

@Sleeping Beauty & The Beast by Katy Pyle with Jules Skloot and Ballez at La MaMa, April 29-May 8

@Patti Smith and Band and Mariachi Flor de Toloache at Lincoln Center Out of Doors, July 20


@portrait of myself as my father by nora chipaumire at BAM Next Wave 2016, BAM Fisher (Fishman Space), September 14-17

@Lost and Found platform, curated by Ishmael Houston-Jones and Will Rawls at Danspace Project, October 6-November 19

@Eclipse: Visions of the Crescent and the Cross by Abdel R. Salaam, Forces of Nature, Aaron Davis Hall, October 27-29

@Marksman by Kate Weare Company at The Joyce Theater, November 9-13

@Francis Picabia: Our Heads Are Round so Our Thoughts Can Change Direction at Museum of Modern Art, through March 17, 2017

@Eiko Otake residency in The Christa Project at The Cathedral of St. John the Divine, October 2016-March 11, 2017

@William Johnston photographs of Eiko Otake, Fukushima: A Body in Places, in The Christa Project at The Cathedral of St. John the Divine, October 2016-March 12, 2017

@Can I Get A Witness? The Gospel of James Baldwin by Meshell Ndegeocello at Harlem Stage Gatehouse, December 7-11

@Terrific books I caught up with this year: H is for Hawk by Helen Macdonald,  The Light of the World by Elizabeth Alexander, Stories of Your Life and Others (also published as Arrival) by Ted Chiang

@Terrific movies and tv I caught up with on Netflix or Amazon this year: Meet the Patels, Learning to Drive, Room, The Martian, Spotlight, Creed, Everest, Meru, The Wildest Dream, The Big Short, Grace and Frankie (Season 2), Argentina, The Salt of The Earth, Transparent


If you like what you're reading,
get more free!