With Baldwin our witness at Harlem Stage 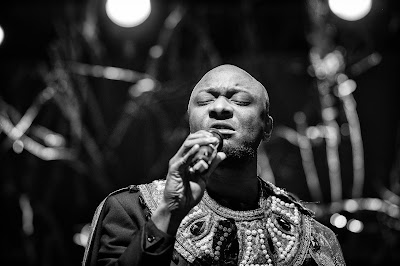 And then, there's church.

When a Black person says it, it's usually the latter and comes with a world of cultural meaning.

And that's where Meshell Ndegeocello is taking you this week--that is, if you paid the price of the ticket. And, if you did, good on you, because you can tell your grandkids you were there when Ndegeocello and her collaborators, inspired by James Baldwin's The Fire Next Time (1963), both tapped and radically remade the ritual of church to address this godawful, pivotal time in our American history.

A Harlem Stage Water Works commission, Can I Get A Witness? The Gospel of James Baldwin encircles vocalist/bassist Ndegeocello and her musicians--Jake Sherman on organ, Jebin Bruni on keyboards and Abraham Rounds on drums--with rings of church pews and chairs for us "congregants." The intimate theater space is further ringed and centered by Abigail DeVille's installations. Before the show starts, the audience can walk around and check them out. I had time to look closely at only two of these assemblages which, despite a few recessed, come-and-go lights, remained cloaked in dark, forbidding mystery. Their mirror shards, especially those covering mannequins' faces, seem designed, like nail-studded n'kisi power figures, to neutralize and deflect evil.

As audience members found seats, Sherman worked the organ slow and mellow in the manner of church. The celebrants/performers began milling around, each cheerfully stopping, here and there, to greet a congregant. Their ritual garments featured reflective glitter, adornments of fake jewels, rich alignments of strips that mimicked fur and feathers. Church began to feel indigenous and Afro-Atlantic and festive and anything but colonized into blandness.

Directed by Charlotte Brathwaite, this warm, inviting, hot and inciting service featured not only funk and jazz and call-and-response and impromptu dance and a charming communion but also several "sermons."  Yes, several. I'd imagine no church Ndegeocello could ever dream up--or could stand--would have only a single mouthpiece for the divine.

Vocalist Justin Hicks, with a voice as sweet as it was passionate, held forth, and so did Staceyann Chin, incendiary spoken-word poet and lesbian activist. And so did Paul J. Thompson, musician turned high school principal who told us how his own difficulties with the America's school system led him to teach in a more nourishing way, armed with Baldwin's essays. And so did vocalist Toshi Reagon, who invoke the righteous power of the Civil Rights movement, exhorting her listeners to raise their voices for justice. 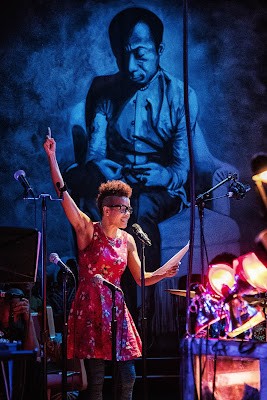 It was, as Chin told us, "a call to order--or a call to disorder, whatever you deem necessary."

We needed several sermons, yes, because there remains so much to grapple with--from the threat to healthy water sources to the accelerated rise of white nationalism to the dulling despair that can make good people pull away from one another and the useful work they could do.

Baldwin's uncompromising voice and his visage--in still portrait and in ghostly, out-of-sync film imagery--presides over the setting. The back page of the program features a photo of him sitting on a chair and gazing down at something in his hands. I cannot make out what it is, but I'm imagining it might be a pocket watch. It's that kind of gaze and that kind of holding. His slender body is folded in upon itself, the bent head half in shadow, the legs and feet close together, the arms foreshortened and locking a protected--and, to our prying eyes, unseeable--space in front of his solar plexus.

Silent, this man who had so much to say with his writing and speaking voice. The face might be interpreted as sad, but I see thoughtfulness. Full of thought. Taking time for it.

He sits alone in the photograph. Writers do their work alone, even if the necessity for their work springs from engagement with a troubled society and with the world beyond it, as did Baldwin's work. Like other writers, he needed his time for quiet, for thought, for processing, for conjuring. Without any of that, we would not have the writing we turn to now and again for clarity, for reminder, for courage, for direction. The writing we need always and now as never before.

He was also a man who used the technology of his day to do a good deal of his critically important work in the world. We know the man not only from his writing but from his numerous appearances on television. Yes. Moving out from quiet, moving into public space, he took every opportunity to go in front of as many people as possible and speak good sense to a country refusing to grow up and look at itself.

I have no doubt that Baldwin, in a similar way, would work the hell out of the new technology of our day. He'd make it work for him, and we'd be better off for it.

That's right. Baldwin would figure out how to turn all this mess into church.

Can I Get A Witness? The Gospel of James Baldwin--running through Sunday with performances at 7:30pm and, on Saturday and Sunday, matinees at 2pm.

Sold out, but there is a waiting list. Go, go, go!

If you like what you're reading,
subscribe to InfiniteBody!
http://feeds.feedburner.com/Infinitebody
Posted by Eva Yaa Asantewaa at 11:39 AM