Following a well-respected career with the Martha Graham Dance Ensemble and Les Ballets Trockadero de Monte Carlo, Edgar Cortes set out to develop his own projects in modern dance. Later this month, Edgar Cortes Dance Theater, formed in 2009, will present its latest ensemble production at The Riverside Theatre. SOL-I-DÓ pays tribute to the choreographer's homeland, inspired by remembered imagery, legends and music. 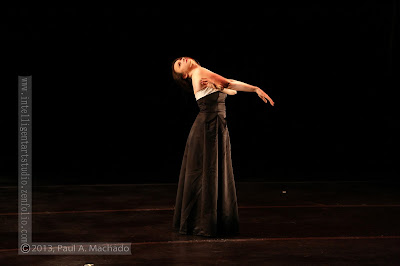 "The show is not about the history of Portugal but what my country means to me," he says. "Different vignettes that remind me of what's getting a little bit lost--a wonderful, rich variety of traditional folk dances," such as the corridinho, an energetic, rotating circle dance from the Algarve, the southernmost region of Portugal.

Cortes, born in the southern municipality of Santiago do Cacém, resonates with people who live by the sea. He also loves the south's green landscape, its fields of poppies and sunflowers, all reflected in SOL-I-DÓ's design.

"SOL-I-DÓ is a play on words. It's part of a very popular song that everybody in Portugal knows when they're growing up. I'm not even sure if it's a real word or made up. The words go, 'They were both on the corner, playing the accordion and dancing the solido.' Solido is not really a dance but, in Portuguese, it rhymes with the rest of the words. It sounds very playful.

"Well, in America, not a lot of people know the song; it doesn't have the same effect. But what I did was divide the word. The way I'm writing it out--SOL-I-DÓ--gives it other meanings: Sol means sun. I--the "I" in the middle--means and [in Portuguese]. Dó is another word for pity or sorrow.

"That's a perfect way to describe my country: sunny and bright but also a lot of sorrow--which is kind of the way I feel, being away from home."

Without a doubt, Cortes had to include fado, the signature Portuguese music of sorrow and nostalgia.

"You think Portugal, and you have to think fado and sardines and codfish and Port wine. I have a dance about sardines as well! And, there's definitely comedy...a little."
For this former Trock, there must always be a little comedy. 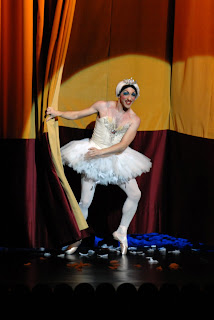 Here's something about Cortes that I remember posting here, in June of last year, from a 2010 episode of Here's the Thing TV.