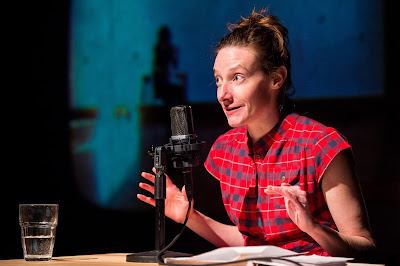 There's no end to And.

Well, it does end--in the literal sense--because, of course, the audience is allowed to get up and go home. But, really, it could have picked up from there and rolled on. And I'm not sure I would have had a problem just sitting there, in Abrons Arts Center, watching and listening to Aynsley Vandenbroucke mostly talking about her life and doing other things. Why not? It's an expansive life lived by a woman self-possessed, awake, curious, always ready to tilt into next. We tilt with her.

And is autobiography bridging disciplines--visual, verbal, sonic, kinetic ones. And a bibliography; Vandenbroucke's program notes include a long list of her recent and influential reading. (Spending an hour with a smart cookie who wears her smartness with accessible humanity and ease ain't half-bad.) And's maker and mover regards the work as "a series of live, three-dimensional essays." Sometimes she tucks the many pieces of her story and her preoccupations inside an inventory of statistical details, at once containing and revealing, safeguarding and sharing intimate, emotional truths. ("Number of times I questioned my relationship to the world around me: Countless.") As she recites this litany, her voice--quiet at first, increasingly warm and supple and musical--she takes her quirky statistics to a level of monastic chant.

There is the dancemaker and the academic, both driven by questions and uncertainty. ("Number of times an older choreographer told me I'd stop asking questions as I got older: 1.") There is a marriage and an entrepreneurial partnership, both adventurous, both now ended. Backstory: With her ex-- photographer Mathew Poikok--Vandenbroucke had created and directed Mt. Tremper Arts in the Catskills. Purchasing property at Mt. Tremper also figures in a monologue by the late Spalding Gray, and she shares this video with us, repeatedly interrupting her own entertaining narrative with Gray's, one of a number of ways she toys with notions of structure and constraint. Both artists are dressed in countrified plaid shirts. One frets about gypsy moths; the other worries the details of hosting an arts center, like placing mints on artists' bed pillows.

And there's single life in one's late '30s, hook-ups in the digital age. There is Vandenbroucke dancing on video, a white woman nearly dissolving in the liquid fire of house music, her hair flying, arms flinging, face a blur though her shimmying body remains a distinct, black-clad, vertical column inside this ecstacy. She and the music belong to each other--though, ultimately, she belongs to herself.

Often single words, or single quotes, briefly flash on the theater's walls. We do or do not take them in. We do or do not notice or focus on them. We might grab one and swallow it whole because it means something to us. In that way, Vandenbroucke gets us dancing for her in a space we have made inside our own minds.

At one moment, Vandenbroucke entirely removes herself from the picture, sitting out on a nearby staircase as we gaze at the visuals playing out before us. At another time, she relocates herself and the locus of focus to a space in audience territory. In both incidents, you immediately feel the difference, which speaks to the confident, convincing presence she has established as And's performer.

And runs through Sunday, April 2 with performances tonight and Saturday at 8pm; Sunday at 3pm. For information and tickets, click here.

Subscribe in a reader
Posted by Eva Yaa Asantewaa at 9:03 AM