In memoriam: The tragedy of Fukushima 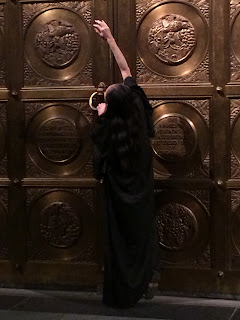 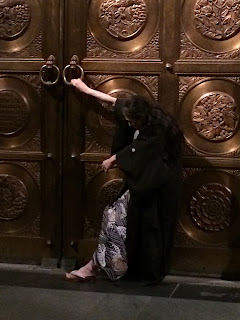 During yesterday's anniversary remembrance of Japan's 2011 tsunami and nuclear disaster--a deeply moving event organized at the Cathedral of St. John the Divine by artist-in-residence Eiko Otake--Katja Kolcio, choreographer and Wesleyan professor, spoke of the political upheaval wrought in the wake of Ukraine's 1986 crisis at Chernobyl. Photographer William Johnston, Otake's longtime collaborator, noted the growing environmental activism in Japan following the Fukushima crisis. And we were frequently reminded that, just about fifty miles north of here, in Buchanan, New York, the Indian Point nuclear power plant poses a similar threat. A few months ago, state officials announced an agreement that, by 2021, would lead to the complete shutdown of Indian Point--long touted as "Safe. Secure. Vital." and "Right For New York" by its operating Entergy Corporation.

Massive visual documentation, provided by Johnson and others, alerts the world to the devastating, enduring consequences of nuclear accidents--whole towns emptied of people, toxic and uninhabitable except by irradiated animals and plant life. Otake's program drew together numerous educators, activists and visual, literary, music and movement artists to illustrate how creative communication can help us begin the process of grasping the massive scale of the tragedy and the details of lives destroyed or upended.

And Otake, the inimitable, danced her latest iteration of A Body in a Cathedral, cloaked this time in black, thrusting through holy space like a crow in flight, in alarm, disorientation, displacement, grief...and warning.

Remembering Fukushima: Art and Conversations in the Cathedral was presented in partnership with Asia Society and Danspace Project.

Subscribe in a reader
Posted by Eva Yaa Asantewaa at 1:33 PM