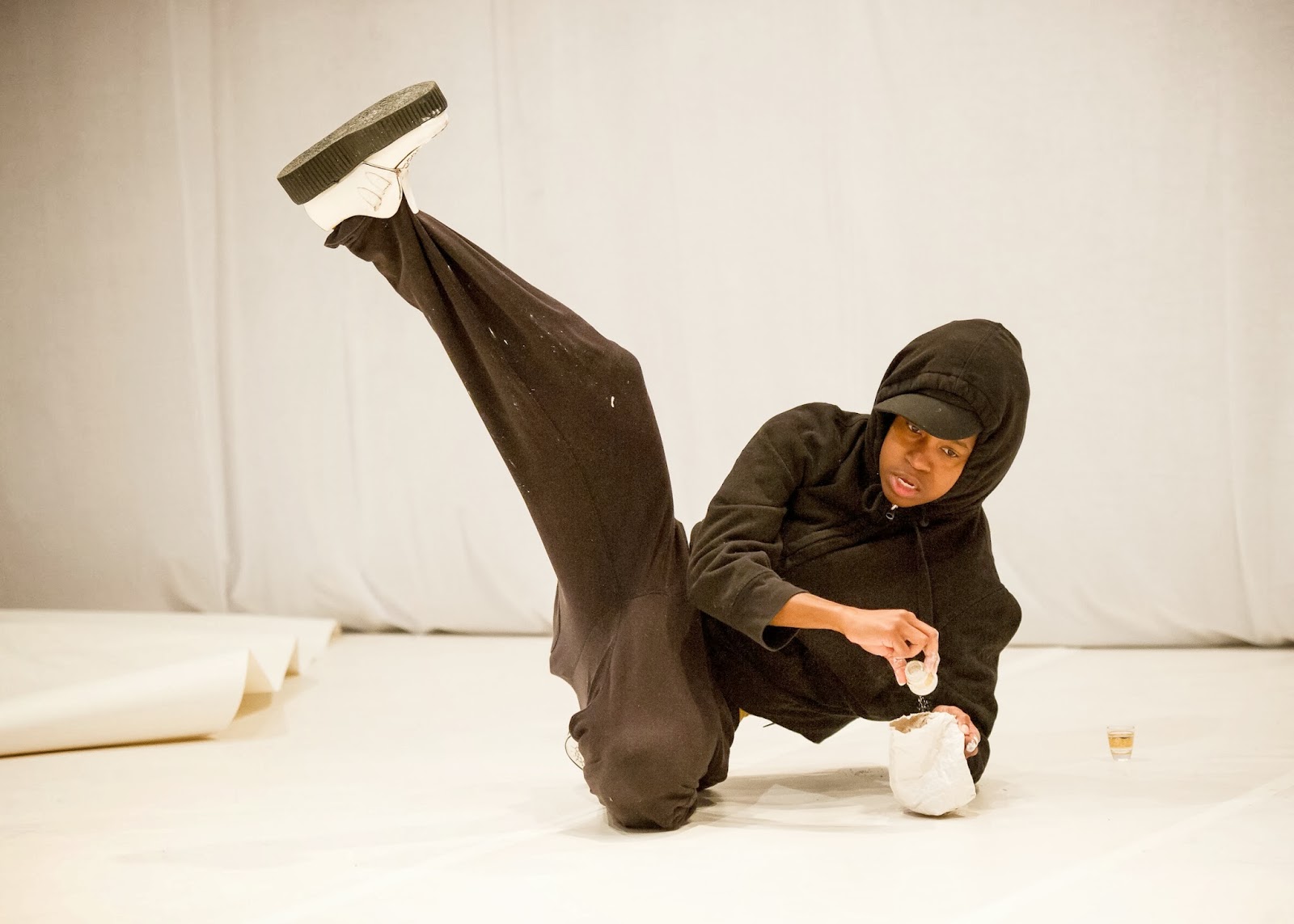 Dana Michel sidles out from behind a white curtain stretched along one wall. She seems shy, at first, not sure or secure about being seen. She's dressed in a black hoodie that hides her long dreadlocks, and in black slacks and shoes with thick soles. Her tense arms anchor her balled up hands like stumps at waist height. She moves in stiff, tiny jerks and twists of ankles and elbows and does not look at us. What's that box-like object poking out from the back of her hoodie? What are those squawking noises coming from her mouth? What's that white stuff smeared around her mouth?

We're at American Realness 2014 in the Experimental Theater at Abrons Arts Center, watching a performance called Yellow Towel, a US premiere of a work by a Canadian dance artist.  But it sure seems like we're trapped in a room with one of those eccentric street people we consider damaged goods and give wide berth. We're trapped for 75 minutes, forced to look at and listen to this person who moves in front of these white curtains like animated Expressionist brushstrokes rendered in thick black paint. She's a living piñata whose garments erupt in showers of Q-tips or rubber bands. When she goes with her impulses, she's all body--spread, contorted, vulgar, messy--and working on her own system, taking her time with everything in an environment that, except for her occasionally lucid mumblings and outbursts, can be dead silent.
That baseline quiet, and that pace in which little happens and what happens makes little sense, controls us. It is her show. A kind of victory in that.

Michel's publicity sources Yellow Towel in her childhood envy of girls with blonde hair and suggests that the solo probes Black stereotypes via her revealing, uncensored alter ego. You have ample time to think about that and what it might mean that her alter ego owns a laptop upon which she drapes a big, curly Afro wig.

I first saw Dana Michel performing a solo--the greater the weight--in the spring of 2007 at PS 122's DANCEOFF! series and noted that the Montreal-based artist was a "killer soloist" with "fiery authority." Seven years later, in Yellow Towel, she is no less than that.

Yellow Towel is now closed. For information about other American Realness 2014 events at Abrons Arts Center (through January 19), click here.

Posted by Eva Yaa Asantewaa at 6:50 AM