The struggle is real. In 55 minutes, Make Thick My Blood at Theatre Row reveals what most productions of Macbeth ignore: the physical and psychological trauma a couple faces after the loss of a child.

The audience enters into a small, intimate space. The stage is covered with a burlap tarp reminiscent of a bunker, but the calm music suggests the war is already over. Lady Macbeth (Dawn Stern) is center stage on the ground bowing down, shrouded in a dress of mourning. Macbeth (Stephan Wolfert) enters, and the two fall into a dance of simple, sharp movements. Shoulders drop into a slumber, he carries her as she tries to hold on, he crawls away, fighting the air, fighting the mind, fighting to the top, to only collapse, and repeat. What weighs them down is the bright red stain revealed on Lady Macbeth's white undergarment.

The light splashes the entire stage red, and we are at the top of the play. We see the Macbeths grapple with the loss of their child.

Her body becomes the dagger he sees. When Lady Macbeth convinces Macbeth to murder the King, it is not only with her words, but with her body as the weapon. Maybe if he does this, they can finally move on and forget their loss.

When they ascend to the throne, they wear identical crowns. They turn to face each other; a haunting reflection where they see the dark damned spots of their past. They walk slowly hand-in-hand, bearing equal weight of the glory and consequences of their actions. Loss of a second life does not replace the first.

A baby's cry is knocking. Their inevitable deaths are soon to come. 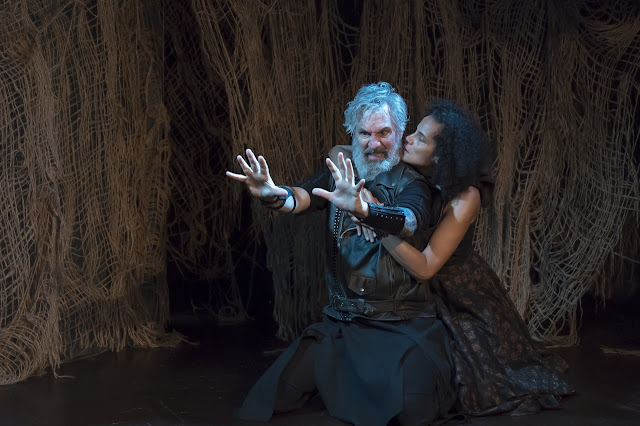 DE-CRUIT, founded by Wolfert and Stern, adapts Shakespeare's texts through the lens of trauma survivors. Make Thick My Blood is no exception. After their loss, Lady Macbeth is present in everything that Macbeth hears, sees, and does. It is in her body that they lose their baby, and it is from that point on that her presence and this traumatic memory never escape Macbeth's mind.

What is refreshing is that this production could have focused only on the nightmare. But it focuses on the effort to wake up; the effort to move on from what no human can fully move on from: the loss of a loved one. The movement in this production, under the helm of Alexandra Beller, an award-winning choreographer in her directorial debut, successfully brings the full range of emotion felt by the couple to the surface. The adaptation and direction carved out space for empathy and relatability in a story that other productions typically leave out. The story of one couple's trauma reminds us that, in our bodies, we all carry the presence of past trauma and that it can manifest itself in unpredictable ways.

******
Kate Foster Vishniakova is a dramaturg working in international and intercultural theater. She trained with artists at the Moscow Art Theatre School, in Germany as a DAAD grant recipient, and with IUGTE–International University Global Theatre Experience. She is a research dramaturg with the Verbatim Performance Lab at NYU and an HR consultant at Orr Group. MA German, Wayne State University. MFA Dramaturgy, Columbia University.
Posted by Eva Yaa Asantewaa at 2:22 PM