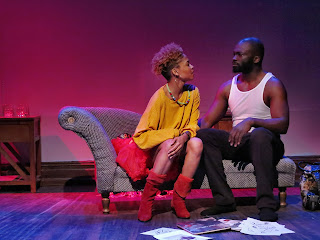 The late ntozake shange's a photograph/lovers in motion--staged by The Public Theater in 1977--now reappears at nearby Theater 80 St. Marks, adapted and directed by shange's writer sister ifa bayeza in a Negro Ensemble Company production. A luminous revival of shange's better-known for colored girls who have considered suicide when the rainbow is enuf (1976) recently concluded its critically-acclaimed return to The Public, renewing interest in the life and oeuvre of the influential Black feminist playwright. Fans of for colored girls--and we are legion--should be wowed by a photograph's lead actress, Imana Breaux. Her vivacious turn as the dancer Michael, a free-spirited little powerhouse, rips open the show, and Breaux owns most of her scenes like a cross between Beyoncé, whom she resembles, and shange herself.

Although there's a wealth of dancerly-ness (from Breaux) and some actual dancing by other players, I wouldn't call a photograph a choreopoem in the captivating way that for colored girls is. But shange was not only a fierce writer but an exuberant dancer, and she's all over Breaux's performance with her multicolored fringes, her red suede boots, her fiery Mohawk, her hobo bag and her jazzy speech rhythms. Would that this gifted actress could have prevailed and not been subsumed by the strangely-shaped story and direction.

Michael--something brisk and cool about this male-identified, archangelic name given to shange's sexy sprite--takes up with photographer/Vietnam vet Sean (Adrain Washington) whose aspirational bravado, it turns out, fails to track with his actual professional accomplishments. Although Michael quickly falls for this strapping guy, and he for her, things seem more than a little off when Sean's photographic preoccupations and history of womanizing come to light. Three other characters complicate matters further over an unnecessarily drawn-out evening: a two-hour first act, an intermission and a second act that, although it is only about a half-hour, also seems endless and graceless. for colored girls... did not prepare me for this. I would not have expected shange to write a straight-out soap opera, let alone one filled with artificial characters who fail to inspire our concern and care. Along with Breaux, there is one performer I'd be eager to see again. Marc Deliz (as Sean's long-suffering gay friend Earl) gives an fully embodied, grounded, nuanced, quietly shining performance before events overtake his efforts as well.

I'm mindful that, for all the well-deserved love shange received when she gave us for colored girls..., she also caught hell from some folks who took her uncompromising Black feminism as a slam against Black men. Nonsense, of course. But a photograph, with its depiction of Sean (among other stereotyped characters) could be ready evidence for the haters.

Historic Theatre 80 St. Marks is tiny, and its humble intimacy can be a strength for the right show--bringing an audience close to performers in a "we're all in this together" atmosphere. That's a great opportunity that a photograph/lovers in motion is simply not able to seize.

a photograph/lovers in motion continues through February 29. For information and tickets, click here.

Subscribe in a reader
Posted by Eva Yaa Asantewaa at 11:08 AM