The new lobby for Performance Space New York (renovated Second Coming of historic PS 122) might be the East Side equivalent of the entranceway to The Kitchen. There's almost identical warmth and appeal--which is to say, absolutely none. At least, the lobby at Chelsea's New York Live Arts often offers something creative to gaze at and the chance to take a load off while you wait.

On opening night for PSNY's COIL Festival--on now through February 4--I could not wait to get out of that lobby and up to the 4th-floor studio for the New York premiere of visions of beauty by Heather Kravas. Now that space has possibilities--generously broad with an impressively high ceiling and row of tall windows. It will be interesting to see how a variety of artists re-imagine, re-shape and activate it, just as it will be welcome to have this influential venue back online in my neighborhood. 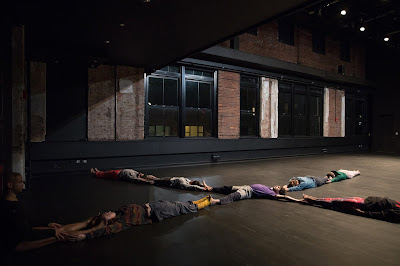 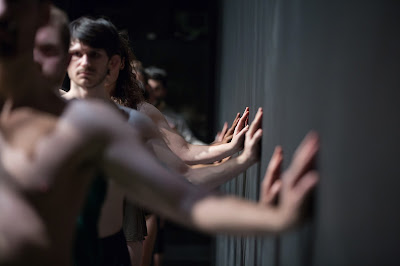 Kravas's vision felt like an apropos place to begin again. Its minimalism and quirky, glacial pacing and moments of matter-of-fact nudity seemed like flashbacks to the sort of thing I remember experiencing here in decades past when it was still cramped-and-funky PS 122. Its quietude, its stillness, seemed intentionally therapeutic. The re-arrangements of wedges of nine dancers in various, alternating, far-flung pockets of space seemed intent on messing with our ability to claim them--the way an audience can "herd" a bunch of performers, as entertainers, in our minds. Instead, they evaded us. They slowed us down and made us wait and gave us an uncompromising atmosphere in which to wait. The last show I'd seen--at The Joyce--did the polar opposite of that, expertly, and it was an ongoing struggle for me to keep my eyes open for Kravas, something else I remember from certain moments and certain artists at the old PS 122.

Though described as "anti-spectacle," the hour does contain one fantastic passage in which dancers create one long, highly-active braid of interlocked bodies along the floor, supporting and shifting under one another. Something oddly meditative and a tad creepy and all the more fascinating for the understated way it brings those qualities together.

visions of beauty continues on the following schedule:

For information and tickets for this and other COIL events, click here.

Subscribe in a reader
Posted by Eva Yaa Asantewaa at 9:07 AM