In Russian Transport, a tale of the secrets of a Russian-Jewish immigrant family, playwright Erika Sheffer, making her Off-Broadway debut, gets a big, lucky boost from her talented ensemble.

Diana (Janeane Garafalo) anchors this Sheepsheads Bay household, playing the kind of wiry mother with eyes behind her head and a sharp remark–in English, Russian or Profane--at the ready. Basically goodnatured hubby Misha (Daniel Oreskes) runs the family business, a car service in financial decline. Teenagers Mira (Sarah Steele) and Alex (Raviv Ullman) appear bright enough but preoccupied. Mira, resistant to the controlling Diana and allergic to the badgering Alex, can’t wait to escape to an art history study program in Italy–that is, if her mother will grant permission (guess the likelihood). Alex, dreaming of his own independence, augments his Verizon sales job with a mysterious source of extra cash that no one seems to question until he offers $200 to his struggling dad (take a wild guess here, too). 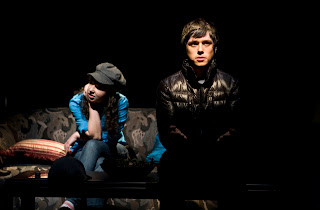 Into this soap opera in the making struts Diana’s brother Boris (Morgan Spector) on serious business from the Old Country. He’s buff, tattooed and rocking the kind of easeful swagger and charisma that would signal trouble ahead to anyone paying the least bit of attention. Think the young Brando or Jack Nicholson but come back to Spector, because this actor does his own deceptively effortless job of embodying a mercurial theatrical archetype. Before long, the insecure, susceptible Mira and the striving Alex get drawn into a very dark place. I’m pretty sure that no one on either side of the invisible fourth wall could be naive enough to be surprised by the contour and contents of that place.

Like Sheffer, director Scott Elliott lucks out with this cast, particularly Garafalo’s embrace of her character's insistence on making order and ordinariness centering forces in family life. But the direction and acting only serve to illustrate paper-thin, contextless characterizations–how did these people get to be the way they are?--and a plot that takes forever just to roll up within sight of anything interesting and then simply drives off a cliff.

Russian Transport, presented by The New Group, runs through March 10 at The Acorn Theatre. For information, click here. For tickets, click here or call the box office at 212-239-6200.