Welcome to Artists Reach Out: reflections in a time of isolation. I dreamed this series of interviews out of grief for my work both as a documenting arts writer and curator of live performance. In this time of social distancing, we are called to responsibly do all we can to safeguard ourselves and our neighbors. It is, literally, a matter of life and death.

But there's no distancing around what we still can share with one another--our experiences, thoughts, wisdom, humor, hearts and spirit. In some ways, there are more opportunities to do so as we pull back from everyday busyness out in the world and have time to honor the call of our inner lives.

So, let me introduce you to some artists I find interesting. I'm glad they're part of our beautiful community, and I'm eager to engage with them again (or for the first time) in years to come. 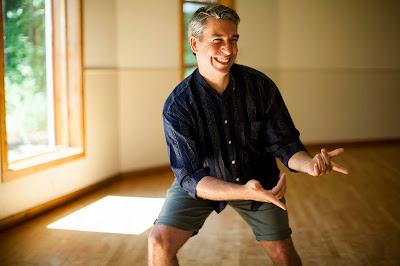 Peter Sciscioli is a Brooklyn-based interdisciplinary performer, creator, educator and producer whose work encompasses dance, music, theater and film. Since 1997, he has been creating performance works through a choreographic lens with a wide variety of collaborators in venues around the world. In 2012, Peter founded the International Interdisciplinary Artists Consortium (IIAC), a network of artists and producers working across disciplines and cultures, designed to share resources. As a performer, he has worked closely with Jane Comfort and Daria Faïn, and with Meredith Monk in various capacities. Peter has taught his approach to Voice as Movement in Central and North America, co-initiated The Sounding Body workshop series at Movement Research (MR) and currently offers private lessons online. He has received recent support of his work and initiatives from MR’s Global Practice Sharing (GPS) program and the U.S. Embassy Tegucigalpa, Honduras. Each summer Peter also serves as facilitator for a IIAC residency and Moving Arts Lab, a festival meeting ground for interdisciplinary exploration, at Earthdance in Western Massachusetts. www.petersciscioli.com


Do you have a current or planned project whose progress is affected by the pandemic?

For the last two years I’ve been engaged in a group process intended to deepen my research and practice of an approach to the voice and body I call “Voice as Movement.” Initially, I invited a few colleagues to explore some ideas and inquiries, and that process has evolved into creating a work that can eventually be shared with others.

We’d intended to move to a next-stage this spring, but instead have continued meeting once a week online. In some ways, living through this pandemic has allowed us to deepen our process, allowing something to unfold in its own time and in connection to the now, and acknowledging that the process itself has inherent value. Those have been some of the gifts. Much gratitude goes to Sara Galassini, Luisa Muhr and Petra van Noort for continuing to share their wisdom, care and curiosity so generously.

Briefly, tell me about how you got involved in the arts and in your particular practice.

“Voice as Movement” is informed by years of engaging in music, theater, movement and energy work, and has evolved over the last ten years or so. As a child, I studied Western classical violin and performed in musical theater and operas. I later acted in plays and began formal dance training in college. After graduating, I moved to Chicago where I was fortunate to join Chicago Moving Company under the tutelage of Nana Shineflug, one of the city’s matriarchs of modern dance who specialized in activating the chi-body. I also performed, taught, choreographed and was an administrator for Hedwig Dances, directed by Jan Bartoszek.

After moving to New York in 2002 I started working with Meredith Monk, from whom, along with members of her Vocal Ensemble, I’ve learned immeasurably. Later performing with Jane Comfort and Company and Daria Faïn allowed me to grow in both a dance theater practice and in energetic work, respectively.

In a large sense, I think what I’m practicing is integration. The group process combines somatic practices, voice and violin, while drawing inspiration from a theatrical source as well as a companion planting method and a connection with nature (Three Sisters). My ongoing teaching encourages a deepening into the connections between breathing, movement and the voice. This extends to a personal practice of checking in daily on how I’m feeling, using similar practices I share with others, and trying to nurture myself through a variety of means. While a mantra for me during the pandemic has been “one day at a time”, I’m trusting a continuation of these practices and I would like to envision physical spaces that we can return to, in order to experience direct connection, sharing, and learning with others in the near and safer future.

How does your practice and your visioning align with what you most care about?

I’ve always been interested in and curious about what makes us feel more alive. While engaging in the arts from a young age was exciting and liberating, I later discovered and was able to identify an emergent value system underlying all of these practices. While self-expression is a way of sharing ourselves with the world, I’ve found that ego can often get in the way. One of the things I value most is the ability to attune to oneself and others at the same time. These practices have helped me learn how to listen, to trust in intuition, to be vulnerable, to be strong, to feel connection and a sense of community, and to learn how to communicate through the wisdom of the body. Being able to engage in them with others erases boundaries so that we can connect more on a soul level, expanding our perception beyond ourselves. Kindness, care and compassion feel like deepening presences along the way.

How does your practice function within the world we have now?

While I’m very grateful to be able to continue with these practices right now, the shape of them has changed. Nothing can replace in-person-ness, direct exchanges of energy, the sense of touch and being physically affected by being in the same time and place as other people. The shift to teaching online sometimes impedes my ability to perceive what is happening physically in a person’s body, both visually and aurally, though a good deal is still possible, and I think, is of use. In the group practice, we can’t all sing at the same time and hear each other, nor can we obviously explore what’s physically possible between us. There are distinct limitations. At the same time, the fact that this technology is out there is amazing. I also try to remember the simple fact that we are all living in a body and that it’s through the body that we perceive the world. I continue to be humbled by the ability, abundance of inquiry, contemplation and knowledge that is available to me.

Subscribe in a reader
Posted by Eva Yaa Asantewaa at 5:51 PM