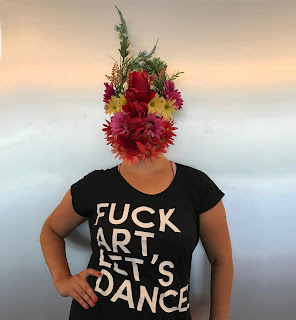 This year marks the centennial of the ratification of the 19th Amendment to the U.S. Constitution (August 18, 1920), which granted women citizens the right to vote. light and desire--a new, full-evening dance ensemble by Colleen Thomas and her multi-national team of collaborators--comes at a time when lack of respect for women’s political leadership is again a matter of concern and struggle. The piece will have its world premiere at New York Live Arts, March 25-28 (7:30pm), during Women’s History Month.


Yesterday morning, I met with Thomas at Gibney to learn more about light and desire. Read on for what she had to say about the concept and making of this timely piece on women's resistance and radical expression.

In 2016, I think I was very privileged--and unaware of my privilege--as an American. With the [presidential] election, I just couldn’t believe the misogyny. I sort of woke up to the misogyny that had always been in my world. Maybe I felt I wasn’t good enough, things weren’t happening for me, wouldn’t go my way or just would feel wrong. I’m not good enough, smart enough. It was all on me.

Seeing the way that people looked at the candidates in 2016, how people talked about Hillary Clinton’s personality, which had nothing to do with what her experience was.... Meanwhile, there’s this other person whose personality isn’t great either! But, no, people are talking about her. Even my women friends--smart and artistic, some of the most intelligent, aware people--said things like “I just don’t like her. I don’t know why.” There were other people, family members in other parts of the country, who said things like, “She’s a criminal.”

I work in academia, I work in this world, and I collaborate with a man in a lot of my work. I just started to question: What is this bias and hatred?

That’s where I woke up to my privilege: Oh, I think it’s so horrible here in America, but they’ve lived through having to move out of their own country to somewhere else where they felt they could have a life. They had personal stories about growing up in a new country. It was really interesting to work with and very cathartic in a way.

All of these women are just extraordinary people. I wanted to work with them because of their dancing and because of who they are, but they are all older now--we’re all older now!--they’re “successful,” whatever that means. We’ve got these jobs, we’re creating art, we’re chairs of departments, we’re successful women. And it’s just interesting to me because I’m not sure we feel that success.

How we feel our power was really interesting to me, how we moved through obstacles. I was interested in telling some personal stories about these women, hopefully something that other people also experience. It went from a political, angry place to “How do we heal? How do we move through? How do we get to this place where we can feel our power, go into our communities and support that?" At the beginning, I was focused on all the negatives: There’s no hope. There’s never going to be a woman president. It’s so deep. And [reflecting on the current presidential candidacy of Elizabeth Warren], we are physically exhausted. I am at the place now where I can’t even read the news.

The stories are an important part of the work. I always work with people’s personal history. That’s what’s real for me rather than having them do something that’s in my mind. Collaboration is so interesting.

There are five other women besides myself, and one--Carla Forte--is Venezuelan-born, a dancer and a documentary and feature filmmaker. She lives in Miami now, but I met her in Venezuela fifteen years ago, and we worked together, toured in different places together. I think she has lived in Miami--where I’m from--ten years now.

When Venezuela just sort of got crazy, she and her husband came here to America. I started off asking each artist how they moved through hard times, passed through their obstacles, and she started talking about being seen a certain way as a Venezuelan in America and even how her mother or their culture expected certain things.

I have a teenage daughter who’s going through a major transition. My husband said this one day--because he’s a man!--”I was a boy, and I went through puberty, and I could just do whatever I wanted.” And he was watching his daughter be seen a different way for that moment of transition where, all of a sudden, other people are seeing you differently, you’re seeing yourself differently, and there’s some kind of freedom that’s lost through how other people look at her. So he just had this epiphany. Really? (laughing hard) Now? At this age, you’re just realizing it now?

So, the piece has become about this idea of transitions, what happens in those moments in between change--slowing down those moments to see what those shifts are. We started with the idea of slowing down the film Carla created for the piece. When things are very, very slow, you can’t tell very clearly what’s happening. Singing can look like a scream...or a laugh. You’re not really sure. That became really interesting to me, the transitions in all forms--women getting older, women moving through hard times, transitions of getting to power, transitions of giving up. Do you give up and move out of your country because it’s so bad there?

Carla talked about her mother wanting her to be a kind of woman like Miss Venezuela--beautiful with the makeup--and she wasn’t. She talked about people in Miami calling her whore because she’s Spanish-speaking. And I talked to people like Ildikó Tóth who lives in Germany, and she said she never felt objectified or anything like that. She said, “I just always dressed like a boy.” Ermira Goro, she lives in Greece now, and she danced with us as well and was here for many years, and then she went on to DV8 [Physical Theatre, a London-based troupe]. She talked about when she moved from Albania to Greece and living with a friend, not having her family there. Everybody seemed to have stories that pertained to their moms and, because I was interested in my daughter’s changes, there's a little flicker of mom stuff in there.

Joanna Leśnierowska is not primarily a dancer; she’s a curator, dramaturg and designer, born in Poland, running a festival. Doing body research with her was really interesting. She’s just so real. She connects to what the truth of the movement is right away, even though she questions, “I’m not a dancer. Should I be doing this?”

I was getting so inspired by my students at Barnard [College] and by [climate change activist] Greta Thunberg, by all these young people who are active out there trying to make change, and they’re like “You guys fucked it up, and we need to do something.” There’s a lot of work I watch my students do that I’m sort of amazed. The idea of having a chorus in the piece, bringing these [local community] people in, was a representation of the inspiration and hope they bring to what’s happening now.

At first, I wanted a lot of women to take the stage and just stand there, make the audience feel uncomfortable. I was so angry! But then I started workshopping with them. I hope that when I get to do this piece in other places, I will get to workshop with women in these communities. The workshop--working with them through improvisation and talking about their own experiences--it was different because they are a lot younger [than the main cast]. There’s power afforded to us because we have some experience, and we feel strength from the places that we’ve moved through. But the hope that I feel is in working with these young people, talking with them about when they’ve felt erased or objectified or passed over and how they got up and kept going.

These are all my alums of different ages. I have such a personal connection to everybody in this cast. We rehearsed the other day, and I cried after they ran this one section. I realized I know their stories, you know?

The mood I feel, through them, is support--for me, for this piece--and comraderie, community, kind of like the Buddhist sangha. I feel the strength through them. They’re not giving up. They are in a place where they believe they can make change and, just like the masks they wear in the piece, the grotesque becomes beautiful. All of these dancers are able to be vulnerable, which is not always pretty. They have nothing to prove.

That’s the other thing. Maybe that comes with being over 50: I’m done trying to be something. We’re all trying to share this experience with the audience. It gets ugly and uncomfortable, but then, somehow, we work through it--I hope! (laughing hard)

Subscribe in a reader
Posted by Eva Yaa Asantewaa at 1:27 PM