For Colored Girls Who Have Considered Suicide/When The Rainbow Is Enuf
The Public Theater
October 19, 2019

When, in the mid-1970s, I first saw Ntozake Shange’s Black feminist choreopoem For Colored Girls Who Have Considered Suicide/When The Rainbow Is Enuf--back then, if I recall, all the letters in that title were still stylishly lower-cased--my Greek-American boyfriend emerged from the theater in a state of shock and horror. As for me--a colored Caribbean-American girl for whom the queer rainbow was yet to be enough--I relished the sheer moxie of it.

As it happened, one of my editors had already given the boyfriend a look-over and quickly summed him up as “not mature enough for you,” but it took me a bit longer to figure that out for myself.

That Shange, though. In For Colored Girls, she had handed me a clue. She handed so many of us a clue.

She had dreamed forth seven women who, through experiences of pleasure and of struggle, figured things out for themselves. Adorned in a rainbow of colors--each in blue, brown, orange, red, yellow, green or purple--her “colored girls” burst into the consciousness of early 1970s New York and proceeded to spin a web of influence in the theatrical arts that has never come to an end. I have since seen Shange’s aesthetics reflected in performers and choreographers I dearly love like Jawole Willa Jo Zollar, Maria Bauman, Andrea E. Woods Valdés, Sydnie L. Mosley, Camille A. Brown and countless other dance, performance and spoken word artists. 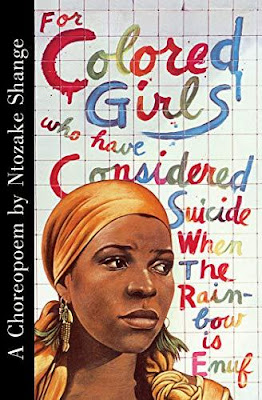 
With every finger snap, every hand clap, every stomp, every swirl, every satisfied press and slip of hands against their own bodies, Shange’s characters insist that attention finally be paid to Black women marginalized and endangered by racism and patriarchy. Because they have learned to pay attention to themselves. Know themselves. Enjoy themselves. Famously, find god in themselves. They speak the truths life has taught them.

Scenic design and lighting create an atmosphere of permission (the disco balls at first retracted above the stage), a space for sensory indulgence (those clustered hangings of abstract stalactites rotating through lights of deep colors). Original compositions by American Roots and soul artist Martha Redbone and hits from generations past--”Dancing in the Streets,” “Stay in My Corner”--underscore and heighten the narratives’ driving intensity.


It's time to discover--or rediscover--the joy and potency of For Color Girls. Go and discover Wailes, a deaf actor and dancer of eloquent charm and fluidity who absolutely dazzles. Rediscover Okpokwasili, a star of contemporary dance and performance, whose trenchant, urgent presentation of one of Shange's most famous soliloquies reminds us--us colored girls, at least--that there's still always going to be someone new trying to walk off wid alla our stuff.

For Colored Girls Who Have Considered Suicide/When The Rainbow Is Enuf has been extended through Sunday, December 8. For information and tickets, click here.

Subscribe in a reader
Posted by Eva Yaa Asantewaa at 1:50 PM