Days of Black Future Past: Black Rock Coalition at The Met 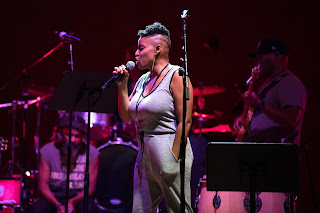 "Black music has been the taproot of every significant movement in rock music. Sadly, the vast majority of Black artists in rock have been erased from the historical narrative or relegated to footnotes."

When you imagine venues to host one of the badbadbadass-iest rock concerts of all times, do you think of New York's Metropolitan Museum of Art?

Well, think again, because you missed Black Rock Coalition: The History of Our Future, a MetLiveArts show designed to demonstrate that Black people not only did rock first but they did it best, do it now and have no intention of stopping. Under Darrell M. McNeill's creative and musical direction, the famed Black Rock Coalition Orchestra and featured guests rocked that house last night with a steady roll. All walls and pedestals should be checked for damage.

Named for BRC Orchestra's 1991 album, the two-hour show started off with the pumping Sly Stone hit "Dance to the Music." That funk functioned here like it did when it was new back in 1967--a sure-fire commercial success for David Geffen's CBS Records and, in 2019, an icebreaker like no other. Though the predominantly white Met Museum audience needed the initial permission to dance to the music, as the evening sped along, folks required little prompting to get up on their feet.

The stage of the Grace Rainey Rogers Auditorium was packed, side to side and front to back, with instruments and artists including a revolving cast of standout featured performers--among them, Nona Hendryx, Toshi Reagon, Stew, Carl Hancock Rux, Living Colour's Vernon Reid and Corey Glover and, led by a commanding Sandra St. Victor, The Family Stand reunited. Yoruba chants and drumming, spoken word, jazz vocals, traditional work songs, gospel tunes, rock and roll and straight-up rock presented a stream of Black genius, all telling a story of determination, improvisation, spiritual depth and lust for life in the face of a long, long stretch of rough times under white supremacy. Times are still rough; the music persists and continues to do its work.

"So what is rock and roll?" Hancock Rux asked, "We begin with juke joints, and women loving women...." He went on to say it's rooted in "trying to find our way home."

Each performance--like vocalist Everett Bradley's unquestionable authority on both "Dance to the Music" and Louis Jordan's "Choo Choo Ch'Boogie"--felt like a sturdy home and one connected, at the foundation, to every other home. Places of rest and reflection, generous nourishment, everyday miracles and jubilation. Hendryx, above all others, took all my heart with witchy renditions of the jazz classic "Afro Blue" and, later, an unexpectedly expanded and capacious "Swing Low, Sweet Chariot." She enters a song at unusual angles, spies just the right, clear path, then guides you through as intensity builds. Reagon quietly took up and met the challenges of Curtis Mayfield's bleak "When Seasons Change" with agility of voice and soul. Stew, with David Barnes on harmonica, updated Bo Diddley's "I'm A Man," making a statement on toxic masculinity from the White House to the church house, from FOX News to NPR. And it was just pure fun to watch Glover rock out again to "Cult of Personality," the show's closer.

An historic one-night only event. So, if you didn't catch it, bummer! But if you love rock, you can still check out Play It Loud: The Instruments of Rock & Roll, at the Met through October 1. Plan your Met visit here.

Subscribe in a reader
Posted by Eva Yaa Asantewaa at 1:19 PM