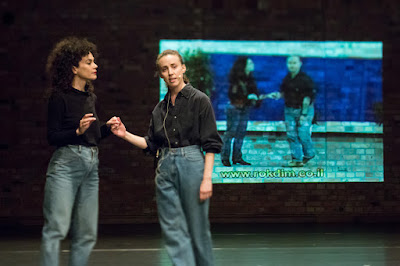 Maybe this has happened to you. You're watching a show and, before long, you're saying to yourself, Damn! Everybody needs to see this! That might occur after the show ends, but when it comes not too far into the hour or so, and that feeling just keeps building and building and building, well....

So, here we have "Everything you have is yours?" It's a fascinating, powerful evening by Hadar Ahuvia and her collaborators and co-performers Mor Mendel and lily bo shapiro, ending its too-short run tonight at 14th Street Y. The question in the title, Ahuvia says, was posed to her by an Israeli security official when she had her passport renewed. In her mind, the question takes a provocative twist.

It inspired Ahuvia to examine her Jewish and Israeli identity in a way particular to her role as a dance artist. She looked at how Israeli settlers of European Ashkenazi heritage (her background) appropriated native North African and Middle Eastern folk dances to solidify their sense of a strong, unified culture in a new homeland, and how, in turn, these numerous "Israeli" dances have been appropriated, watered down and YouTubed by conservative Christian Zionists of the US for their own purposes. If all of that sounds way complicated, didactic, and potentially inflammatory for concert dance, hang on a minute. Ahuvia and her friends do want you to think about all that, but they've got quite a few theatrical tricks to woo you.

The dances--which the three live performers and various on-video instructors demonstrate--have magnetic vivacity and charm. (Some of you, like me, might remember learning a few of these in grade school, back in the day.) But the entire production--created and attended to with meticulous care by Ahuvia's team--appeals not only to the mind but to every sense. Personal histories, cultural history; music; speaking and singing voices; projected photo and video imagery; dance movement, of course; little proffered treats of mint tea and fragrant tangerines; plus the invitation, at the close, to learn some steps and chat with the artists. Everything warmly invites us in--as living bodies-- and helps us stay present with Ahuvia's ideas.

This is a smart, witty, political and ultimately moving work filled with unexpected delights like shapiro's pitch-perfect segment of BBC-style voiceover narration and an alluring passage in which jeans-clad Ahuvia and Mendel overlap an impressionistically-blurred archival film clip of a women's ensemble--begowned, synchronized--performing the same dreamy sequence. The visual design by Gil Sperling (projections) and Kryssy Wright (lighting) obscures, breaks down and transforms the ordinary into the extraordinary, arguing for the undeniable power of the body in motion and our human, irresistible pull to celebratory dance that might or might not have originated with our own people.

"Everything you have is yours?"--a presentation of LABA: A Laboratory for Jewish Culture--concludes its run with a performance tonight at 8pm followed by a post-show conversation with Franny Silverman of Kolot Chayeinu. For information and tickets, click here.

To read Hadar Ahuvia's guest essay about this work, "The Dances Are For Us" (InfiniteBody, January 10, 2017), click here.

Subscribe in a reader
Posted by Eva Yaa Asantewaa at 10:48 AM