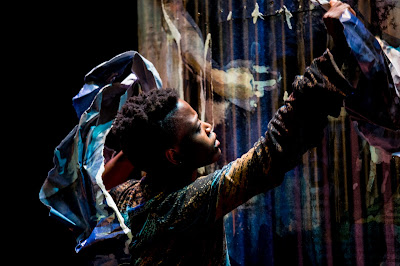 Now here comes Dorothée Munyaneza (Compagnie Kadidi) who, as a child, escaped conflict-torn Rwanda, speaking of what men do to women and girls in war, same as it ever was. This woman will not comply. She will tell terrible stories told and entrusted to her by Tutsi women survivors and their children. In Unwanted, she joins American singer Holland Andrews, raising lacerating banshee voices against genocide and rape, raising angelic voices to embrace all in need of comforting.

The two figures emerged like shamans from the grim darkness of the theater at Baryshnikov Arts Center where Unwanted had its New York premiere over, sadly, just two evenings. Audience members had reached BAC, walking streets with views of the imposing towers of a newly glittery midtown West. Taking the elevator up to BAC's third floor and entering the theater felt like being sealed deep in a cave with healers intent on confronting you with everything you try best not to see. And sounds--Andrews' looping electronic artistry--came to you from all directions and temporal dimensions.

Many observers, it seems, are surprised to find the multi-talented Munyaneza so grounded and assured in her physical presence, so sophisticated in her aesthetic vision. Unwanted is only her second work of choreography; she was the talk of last year's Under the Radar festival for her first, Samedi Détente. But she is clearly an artist who knows her mission, mind and powers. There's more to come from this one, and in singer-musician Andrews--who cites Aretha Franklin, Björk and Diamanda Galás among her dearest influences--she has a fierce partner of equal authority and efficacy.

Choreography, in this case, covers all the ways the body reacts and responds in an environment of impossibility and possibility. Munyaneza's head and torso sharply recoiling from the words she has just hurled into a microphone as if receiving an answering blow. Or her body flattening itself against the portrait of a woman affixed to a tall slab of corrugated tin, like the metal sheeting of a humble roof. Or her fingers feverishly clawing that same painted image into shards of paper waste, needing to destroy every patch, every trace, before she can rest. Or the performers' bodies mobilizing their entire force, lashing phallic clubs against the ground or rhythmically, violently pounding them into vessels. It is, yes, also the breath traveling from its home in the chest to receiving air, carrying histories of violation, humiliation, refusal and isolation. Channeling stories of women who tell themselves they are alive and look around, each day, for something to laugh about. It is in the story of that laughter which, surrounded by unquestionable sadness, still declares "I am here. I stand my ground."

Subscribe in a reader
Posted by Eva Yaa Asantewaa at 10:47 AM