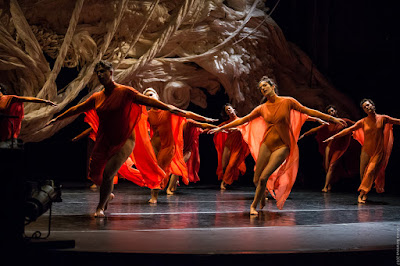 Grief is a force that seizes the body from within and works its way--by covert pathways and on its own timetable--throughout and through. Although humans have devised various rites for directing and honoring its expression, there's no controlling its urges and its dimensions. As such, grief has much to teach the conscious mind that humbly attends to it.

In Keen [No. 2]--in world premiere at the Abrons Arts Center, co-commissioned with The Chocolate Factory Theater and The Joyce Theater as part of Joyce Unleashed--Ivy Baldwin and her dancers dwell within a space of grief. They boldly ask us to pay attention to so much--in Katie Workum's opening solo, in front of that gorgeous, wow-inducing set by Wade Kavanaugh and Stephen B. Nguyen, a surprising, sometimes halting, even awkward exploration with no interest in pleasing our eyes; in the ensemble's lengthy passages of repetition, often numbingly even in tone; or the same ensemble indulging itself in excesses of release and of obvious uses of imagery and theatrical space, all of it given unconditional permission.

Among other things, I thought of valkyries and angels in flight. I thought of Isadora Duncan, that passionate force of nature, and her grief at the sudden death of her two young children. And I thought of furious tantrums in response to the unexplained, the unfair, the unbearable. It's significant that the dancing sometimes evokes the animal world in shapes, moves, rhythms, sounds, herd-like and unguarded behaviors. Grief connects us to our bodies in ways that can make us remember our basic animal selves and force us to let go of constructed, functional personas. Who better to demonstrate this for us than a chorus of dancers, artists who study the many intricate, wild truths their bodies hold?

Lawrence P. Cassella--who, in 2015, succumbed to a rare immune system disorder after brief illness--was a member of Ivy Baldwin Dance from 2003 to the end of his life. Keen [No. 2] is dedicated to this beloved member of our dance community and informed by Baldwin's experience of losing and grieving him. I watched it with a flow of questions: Is Workum, the work's initial soloist, testing the remaining abilities of a body she no longer trusts? Or could she be testing the powers of a new "body" beyond physical form--rotating her wrists to see if she can lift a leg, twining her hands to generate a new set of fingers? When dancers duet, their bodies coming into sync, can we know who is lost and who is mourning? Or is that interconnection, that blurring of distinction, that temporary inability to let go, regain and shelter in one's own, separate energy and identity, at the very heart of grief? Might it be, for dancers, even harder than for the rest of us to let the physical bodies of their loved ones and colleagues go?

Like the process of grief itself, Keen [No. 2] makes no appeal to what a viewer might want or accept. It is unreasonable and unruly in nature, but it is true to its own purpose and logic, presented with admirable conviction by Baldwin, Eleanor Smith and Katie Workum with Katie Dean, Dia Dearstyne, Heather Olson, Kay Ottinger, Marýa Wethers (June 1-4), Tara Willis (June 8-11), Tara Sheena and Anna Adams Stark.

Keen [No. 2] continues through June 11 with performances Thursday-Saturday at 8pm and Sundays at 2pm. For information, click here. For ticketing, click here.

Subscribe in a reader
Posted by Eva Yaa Asantewaa at 10:48 AM