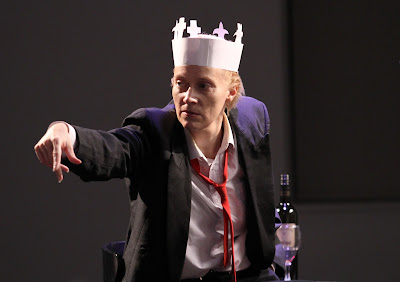 Instead of paying actors to play Shakespearean roles, Emily Carding gets them to work for free. By that, I mean most of the people in her small audience, each one sporting a lanyard ID--her "Duke of Buckingham," her "Lady Anne"--and occasional looks of uncertainty as Carding's masterful Richard III shares cynical confidences with one or gruffly orders around another. As the tale of bloody power grabs unfolds, condensed to under an hour, no one in attendance--even those without named roles--can fully relax. We know that Carding's Richard might suddenly lock eyes with us, requiring something of us, find us wanting.

What's more, Clarence, we can easily be offed by little more than an arsenal of office supplies.

An anticipated highlight of this summer's FringeNYC, Brite Theater's Richard III (a one-woman show) comes to New York bearing awards from the Fringes of Prague and Edinburgh. And, by Richard's will and Carding's skill, it will conquer in its US premiere. The set-up of the new-ish Alpha Omega studio on East 4th Street provides just enough space for Carding to pace or impatiently push off on the wheels of her office chair while maintaining intimacy and a tyrant's grip on her audience.

This Richard's world of scheming and endless violence is our own, where battleground reports come via text message and leaders can instantly document their narcissism with selfies.

The narrow runner of space between two rows of seating--accommodating perhaps 25-30 people--is charged with the energy of Richard's malevolence and excess. Directed by Brite's founder Kolbrun Bjort Sigfusdottir, Carding interprets Shakespeare's Richard--a man of visible disability--with bearing and even speech that I'm greatly tempted to call dance. Dark business suit and skinny red tie askew, her body seems, at once, frozen and propelled in multiple directions even when still. And her speech, if failing in rhythm, moves with varying, unpredictable angles of attack. Deep into the performance, Carding seems to drop into a flow state from which she yields improvised snark--snapping at an unexpectedly stubborn "Lord Grey," Well now I know what you are getting killed for!--or minute, quite convincing facial expressions of fear and disintegration.

Make Richard III (a one-woman show) one of your priority stops along the Fringe. See it today at 4:30pm or tomorrow, Saturday, at 5pm. For information and tickets, click here.

And here's a special note to Fringe veterans and newbies alike: Happily, there's ample AC at Alpha Omega. In fact, you might want to bring a little wrap to throw over your shoulders.

Get your free email subscription
to InfiniteBody.
Click here!
Posted by Eva Yaa Asantewaa at 10:38 AM