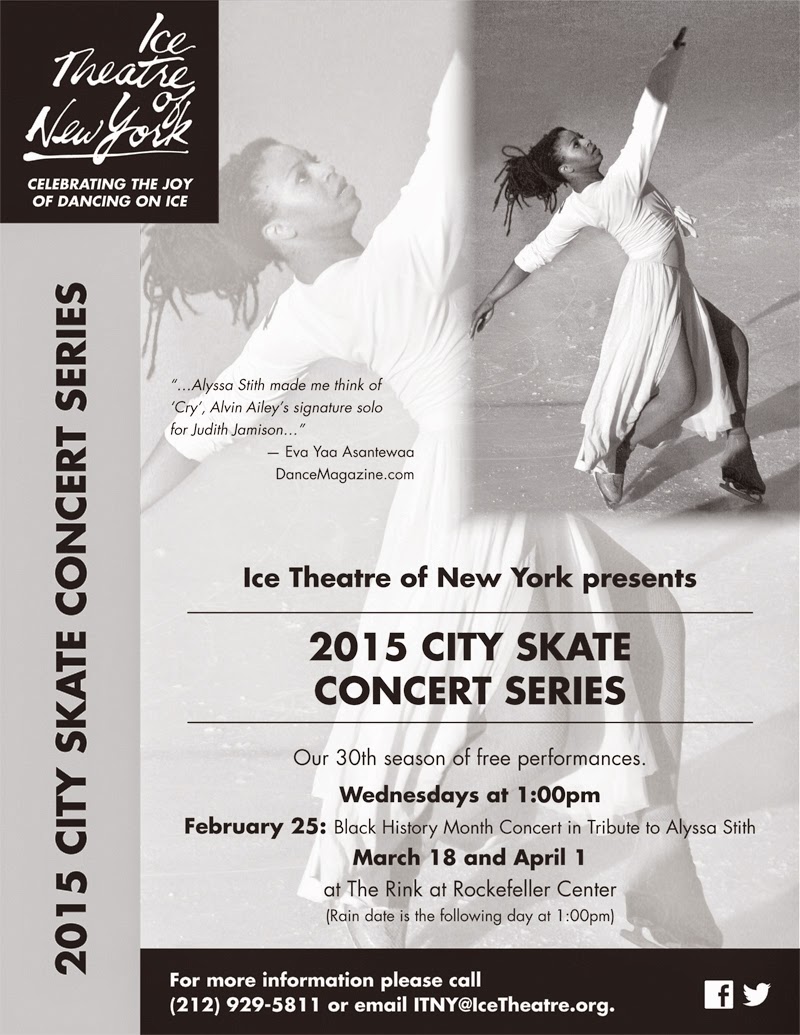 In Chelsea-based Ice Theatre of New York's repertory for ice dancers, you can expect to find the unexpected. Well-known dance choreographers as diverse in vision as Ann Carlson, Twyla Tharp, David Dorfman and Laura Dean have crafted work for that thrilling space where blades meet ice, making ITNY one of New York's most innovative organizations.

As part of its 2015 City Skate Concert Series at The Rink at Rockefeller Center, ITNY will pay tribute to Alyssa Stith--a much-loved figure skater who passed away, at age 40, last November. Once Again, a 2001 duet created by ITNY choreographer Heather Harrington for Stith and Tyrell Cockrum, will be performed at the Wednesday, February 25 show (1pm), a free event.

"I have to say this is an odd process for me re-staging this piece on another skater, because it was made on Alyssa, and she could move differently than a "skater" and embodied the mindset of a dancer," Harrington says.

"She was such a role model for figure skating in Harlem, where we both taught, a fearless artist who put every cell of her being into a performance and was so authentic. I don't think there was a false bone in her body. Sometimes I think was this is what was so hard for her."


Watch Stith and Cockrum in Harrington's Once Again.


"Alyssa was fearless and so committed when we were in the rehearsal process," Harrington remembers. "She dug in. Every part of her mind and body was open. She was able to live in the piece and fully inhabit the nuances in the plays of power, control, love, submission, and release. She did not simplify; she saw all facets, and this came through in every gesture."

Click here to watch In memory of Alyssa Joy Stith,
a video by Deirdre Towers.
Ice dancer Alyssa Joy Stith alternately responds to and conducts
cellist Chris Lancaster in an improvisation one afternoon in NYC in 2008.

Stith started out with ITNY as an office intern, says founder/artistic director Moira North, but an administrative position wasn't her aim.

"She confessed to me that she actually wanted to perform with the company! I vowed to myself that I would find her this opportunity and, before long, she became involved with the ensemble and our outreach programming.

"Alyssa went on to distinguished herself as a great performer in Once Again and, later, in David Liu's, 2:1 and works by Susan Marshall, JoAnna Mendl Shaw, Jean-Pierre Bonnefoux and Elisa Monte. Alyssa took to our challenge of taking dance choreography--made for a floor--and figuring out how to translate it to ice. That was my theory and strategy of how to expand our vocabulary, and she embraced and enjoyed this process. The audience easily forgot whether her dancing was on ice or on a floor. We just lost ourselves in her expressive movement."

"Alyssa was funny as all hell," says Harrington, "She could cut through any b.s. She saw in people their worth and beauty and respected everyone. I look to her as my role model on how to treat others. I hope she sees what love there is for her and always will be."

ITNY returns to The Rink on Wednesdays, March 18 and April 1 at 1pm. In the event of rain, the scheduled performance will be held the following day at 1pm.

The Rink at Rockefeller Center
Fifth Avenue between 49th and 50th Streets, Manhattan
(map/directions)
Posted by Eva Yaa Asantewaa at 10:19 AM