For Marjani Forté-Saunders, dance and activism are one


The following statement, written by dancer-choreographer Marjani Forté-Saunders, was presented for conversation at the most recent Movement Research town hall meeting, held at Eden's Expressway on October 6. Saunders was in California to receive a 2014 Princess Grace Foundation-USA fellowship award in choreography and could not attend the meeting. Her statement was read for her, and a brief--and, in my opinion, tentative--discussion ensued. Saunders has graciously granted permission for me to post her words here in hope of inspiring further exploration and dialogue.

“The precise role of the artist, then, is to illuminate that darkness, blaze roads through vast forests, so that we will not, in all our doing, lose sight of its purpose, which is, after all, to make the world a more human dwelling place.”

“Looks like what drives me crazy
Don’t have no effect on you–
But I’m gonna keep on at it
Till it drives you crazy, too.”

At the approach of MR’s Town Hall October 6, I ask the community of Movement Research what tensions are felt in the balance of Art, Activism, and living as an Artist.

So much starts and ends.

The Autumnal Equinox, sitting directly at the Sun’s Center, at the precipice of an ending season into the beginning of another, there is simply no wonder why in this awe-filled happening, some believed earth was the center of the universe. Everything is changing, at least on this side of the country (says the California girl, where mostly everything stays the same), and when I say everything, I don’t just mean the trees. Really, everything is changing for me.

I’m anxious, unnerved, questioning, doubtful, indecisive, and turning 30. My calendar is all over the place, my dates are clashing, and at the end of the night I’m saying, “What the hell does dance have to do with any of it, anyway?!” So much putting out, I miss having time or energy to put in, to get engaged, in conversation, in exchange, in service, in ANYTHING beyond planning the next performance, residency, rehearsal, class, or grant application. And I feel guilty about complaining, because, as least I’m busy--right? I haven’t had time to fill up though, and I sense the void.

So my questions, at the end of the night, go like this:

Am I putting my energy in the right places? When is the next Community Board Meeting (can I make it--oh, it’s on my only day off of the week, shit). Should I vote in Cali or NYC? Sorry I missed your show? Where am I most needed, where am I most powerful? Is there a place I belong? What’s a downtown dance community, I live in Harlem?

On the other hand (on with my rant) I’m frustrated with racism that is as American as Modern Dance and Apple Pie; the normalizing of white cultural aesthetics at the expense of black cultural innovators and revolutionaries, such as the teenagers on the train with the boomboxes, the real twerkers of Nigeria, Jamaica, and New Orleans. I’m even more frustrated that these aren’t new conversations. That Frederick Douglass, Ida B. Wells, W.E.B. Dubois, Zora Neale Hurston, Langston Hughes, James Baldwin, Toni Morrison, and generations and generations of others have been singing the same song.

I’m as fascinated with aestheticism as much as the next artist, but I stagger in contemplation with what the hell it has to do with the stolen lives of Sam Hose, Emmett Till, Oscar Grant, Renisha McBride, Trayvon Martin, Michael Brown, and so so so, many more.

I make art but I don’t feel like I have the freedom or the right to do so without reference to these crimes against humanity that continuously go, unchecked?

In this regard, reminded by my colleague and sister Paloma, I’m not alone in these questions or frustrations. I’m instead quickened by events such as Paloma McGregor’s Dancing While Black, Camille Brown’s The Gathering, UBW’s Convening, Jaamil Kosoko’s Black Male Revisited, The Requisite Mover’s Wellspring, all these intensives and gatherings that boldly discuss and strategize the galvanizing of resources to support black artists, voices, producers, writers, etc., to shift the lens and spaces in which our work is produced, reviewed, and heralded. Changing the tide, re-inventing, re-membering, re-cycling, re-birthing, and re-connecting.

It wasn’t until I joined Urban Bush Women in 2006 that I learned I could even do both, be an artist and activist. I had lived them as separate lives, under the umbrella of student-hood in college. Through UBW I learned about some of the intersections of Art and Activism, and later found those revelations echoed in the work of Nia Love’s BSD| Blacksmith’s Daughter, and Ebony Noelle Golden’s Betty’s Daughter Arts Collaborative, and many many others. These folks rouse my questions as I live out the knotty narrative of artist/activist.

Lately, as everything changes around me, as I too, change with the shifting seasons, the looming whisper of cold weather, I throw on that sweater, pull out those scarves, and find that I’m in fact all bundled up with questions; the communities I’m apart of, the dance circles I traffic, the work I see and make, the artists I work with.

At the Convening we called upon the resources of our community as Black Female Choreographers. I now call upon the pool of information and resources in my MR Community: How are WE navigating Art and Activism? How does our work interact with our nation’s socio/ecological/economic/political contexts? At the approaching Town Hall October 6 at Eden’s Expressway, might I request this be among the conversation? 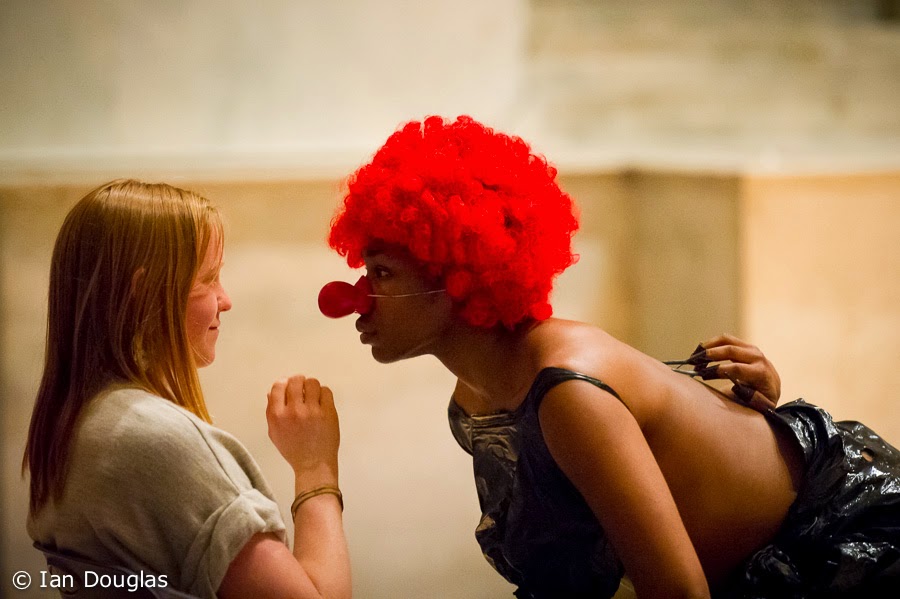 Marjani Forté-Saunders is a Pasadena, CA native and Harlem resident.  She traveled as a performer with Urban Bush Women Dance Company for five years, and is now co-founder with Nia Love, of LOVE|FORTÉ A COLLECTIVE. Saunders is a 2014 Princess Grace Choreography Fellowship Awardee for new work commissioned by Los Angeles-based dance company CONTRA TIEMPO. For her work being Here…: a trilogy of works examining the intersections of mental illness, addiction, and systemic poverty, she’s received support from the Foundation of Contemporary Arts--Emergency Grant (2012), Puffin Foundation (2013), 651 Artists Development Initiative Artist (2013), Lower Manhattan Cultural Council (2014), and a New Music USA (2014) grant for a fifth collaboration with husband and composer Everett Saunders in the construction of a 3-D sound installation [www.being-here.org].   Saunders has also received support from the Jerome Foundation (2013, 2014), Mertz Gilmore Foundation with LOVE|FORTÉ (2013), Yellowhouse (2013), and the Harkness Foundation (2014).

Saunders is a passionate educator, having taught master classes and workshops across the US and beyond, including the American Dance Festival and ADF China.  She is also a member of Urban Bush Women’s BOLD Teaching Network, offering UBW’s unique approach to dance training and community engagement. Saunders is currently serving as Adjunct Lecturer, teaching Modern Contemporary Technique at Hunter College City University of New York and will be Guest Lecturer/Choreographer at Princeton University in the Fall 2014.  With deep gratitude, she moves onward in her work honoring that it stems from being born in and having engaged with culturally rich, vibrant, historic, and politically charged communities.
Posted by Eva Yaa Asantewaa at 2:18 PM

I am looking to start suggesting and testing ANSWERS. I am sick and tired of questioning...my existence, my humanity...in the way that this American, white supremacist, capitalist, patriarchy will have one constantly doing. #BlackLivesMatter is much more than a hashtag.

Forwards forever. Backwards never. This is the chant I grew up hearing and it is with this foundation I take these questions and seek solutions and healing. As my father recently said, "It may not happen in my lifetime, but I didn't believe we could have a Black president in my lifetime either." Leh we go!!!

Eva, Marjani, Thank you! These end of the day, before bed questions about striving and working to do more for the betterment of humanity vs doing what is best for yourself (ahhh no! That's on my only day off. What should I do?) is a slippery slope for artist-activists because how can we do the most for our communities when we ourselves are run down? Dance can be rejuvenating. Dance can be exhausting...no wait, it's more the politics of dance, art, social-politics, and government that are exhausting. Marjani, thank you for writing. Thank you for making. Thank you for being.