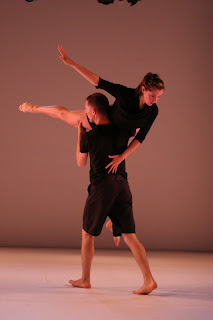 What a lovely, cool and clear evening for a stroll down to Joyce Soho! I took the East Village streets at my ease, finally arriving at the intersection of Mercer and Houston Streets. But when I glanced across Houston, I noticed a police barricade and lots of people just standing about.

We’d just had that terrifying steam pipe explosion in midtown Manhattan a few days ago. What now?

Silly me! I’d forgotten Harry Potter! The witching hour was approaching, and the Pottermaniac book-buyer line snaked all up and down Mercer Street. I have to say this was the merriest-looking queue of New Yorkers I’ve ever seen, and–being a Hogwarts addict myself, but one quite willing to wait for my next and final fix–I was delighted for them. But I had a job to do, as always: Sitting my butt down in front of dance. Happily, the dance I sat my butt down in front of was as refreshing as my walk and nearly as magical as J. K. Rowling’s imagination.

Pam Tanowitz makes ballet-modern dance hybrids–an effort not unique to her but one that she achieves with uncommon grace and gusto. Balletic movements, performed with affectionate care and not in jest, might look exotic on the modern dance stage, but they are simply as valid as anything else in Tanowitz’s overall scheme. She is a garrulous, multilingual poet of the art of dance, and I’m eager to hear whatever she has to say.

Forevermore, her new four-part ensemble piece, is one of the most handsome productions I’ve seen at Joyce Soho in recent memory, and every element of it just seems right. For some reason I can’t explain, I was immediately, oddly cheered to notice the low barrier with which set designer Philip Trevino separated dancers from their perhaps all-too-close watchers. (Dancers step over this boundary to enter and exit and, eventually, two of them temporarily crush it beneath their supine bodies.) I liked the understated midnight elegance of Kathy Kemp’s costumes and the subtle moods of Julie Ana Dobo’s soft, cool-tinted lighting. I savored the wildflower bouquet of music: Henry Cowell’s mournful Ensemble for Strings, a jangly old Cheap Trick hit, and the chiming, thrumming picketty-pocketty-pock of Dan Siegler’s Light bulb Variation 1 and Light bulbs All Along. Everything held the four sections of counterintuitive movement in a firm embrace.

Guest artist Posy Knight led the way in “Forevermore Solo” with her springy turns and off-kilter stances and transitions. In “The Shades,” Daniel Madoff eventually merged with a trio of women by creeping backwards while holding a strained, precarious balance. The moves unfurled, stretched and glowed within a pristine physical environment and tense atmosphere.

The dancers could be seen whole; in their abstract movements, they resembled insects illumined and magnified as if under a lens. We examined details that were repeated and slowed or speeded for our inspection. In “Forevermore Duet,” when Madoff’s rested his hand on Melissa Toogood’s waist and she deftly snapped that hand into place, she delivered an unforgettable byte of data about their relationship.

The ballet-ness of Forevermore is represented in far more than the occasional clickety-clack of pink pointe shoes on the Joyce Soho floor or even the inclusion of classical port de bras or footwork. It’s in the clarity of movement–a clarity nevertheless affording room for release and expression by an admirable corps of dancers.

Forevermore ends tonight. If last evening was any indication, tickets will be hard to come by, by, but you can try calling 212-334-7479. To visit Pam Tanowitz Dance online, click here.